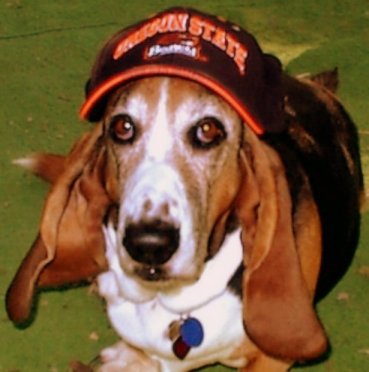 Sydney Albert Beauregard, son of Winston, came into our lives at eight weeks of age.  Syd doubled the love, and doubled the mischief.  What Winston couldn’t think of, Sydney could and did.  I’d need a full page to list the items destroyed by those two.

Wow, did they like to play, a little rough at times.  You’d think they were tearing each other up. And sometimes play did turn into a squabble.

We spent many great times traveling with them in the motorhome.  They always attracted attention wherever we went.  Kids loved them and they loved kids.

A trip to Oregon first time out with Sydney. He was still quite young and chewing on everything.  In the California redwoods, he chewed on a pine cone.  One of the sharp bits somehow got into the soft tissue of his mouth. He became a very sick little guy and had to spend the night in doggie ER in Salem, Oregon.

When we arrived home, the bit of pine cone traveled to the top of his head. He sprouted a mound that looked like a unicorn horn.  When Winston bumped into it, it exploded in a mass of puss and blood.  Another trip to vet, this time ours.

With the sore cleaned and flushed, it healed and everything went well.

In the photo Syd is wearing my husbands Oregon State University hat.

When cancer took Winston from us at 12 years of age, Ophelia came into our lives.  At the time Syd was eleven.  He despised Ophelia for the first three months they were together.

Lady Shakespeare’s Ophelia’s story will be next.

Below is Winston and Sydney. 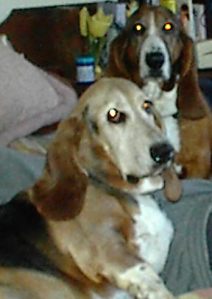